skip to main | skip to sidebar

From Asteroids to Space Miner 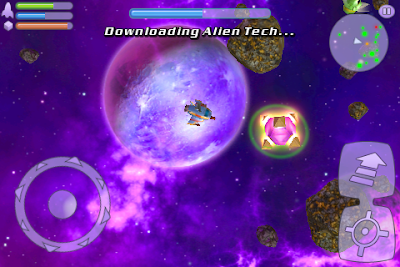 It started out rather innocently with our original prototype, which was an Asteroids-type game that required the player to physically rotate their iPhone to rotate their ship around to face incoming asteroids. Tapping the screen fired your guns, asteroids would break apart when hit, and you would have to clear the screen to advance to the next level. That was the extent of it. It wasn’t meant to be a very complex game, just one of many tiny games we planned to design and develop using what we called the “Pivot-dot” mechanic, which was this idea of 360 degree device rotation as a core gameplay mechanic. There was really only one problem: the mechanic wasn’t very fun.

When we went back to the drawing board, we also drew a second conclusion: Asteroids is a classic game, but people have played it a million times before, and there are countless versions of it available on the App Store. If we wanted to make a game worthy of the Venan name, it would need to be more than just an Asteroids clone with a new control scheme.

This resulted in the earliest form of the current Space Miner, which asked a very simple question: “If Asteroids never came out, how would you make it today?” In that sense, Space Miner: Space Ore Bust became emblematic of some of the most popular design trends of the last 10 years: Non-linear structure, free exploration, loot collection, deep customization, physics-based gameplay, a storyline, even an achievement system through Plus+. However, despite our gameplay additions, we also kept the heart of the classic Asteroids gameplay – which is that blowing stuff apart is a lot of fun.

With this general gameplay philosophy mapped out, we started pondering the theme of the game. We were tired of generic sci-fi shooters with “gritty” characters and color schemes and decided early on that Space Miner’s universe would be colorful and lighthearted, with a cast of silly characters to accompany the player through the adventure. This led to the idea of Mega Space Corporation trying to take over your crazy Uncle Jeb’s asteroid field, which then evolved into the current game’s storyline. 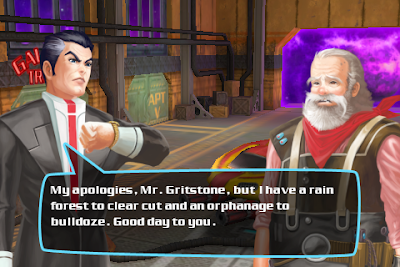 We also used this lighthearted theme to help us with our gameplay mechanics. For example, the Ore Collectors used in the game to collect loot from asteroids and enemies are described as giant space vacuum cleaners, and the enemies in the game all have Wall-E-inspired robo-blurbs that they emote regularly. Not having to take ourselves too seriously resulted in a lot of fun additions to the game, from enemies with giant magnets on their faces to the inclusion of special asteroids like explosive “gastroids” and the ever-elusive “piñatastroid”.

As the release of Space Miner: Space Ore Bust draws closer, we hope that you will join us at our Twitter feed or Facebook group to partake in the festivities which include but aren’t limited to:

You can also stay up to speed on Space Miner by checking the Venan Arcade website.